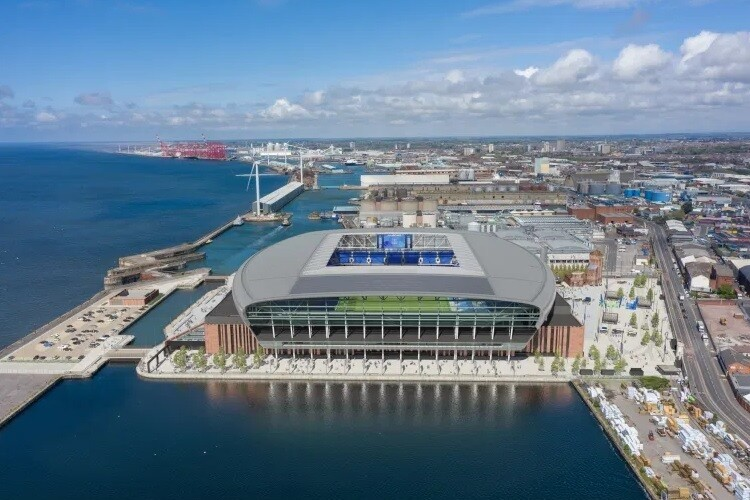 Councillors approved construction of a £500m, 52,888-capacity waterfront stadium and an outline application for a £82m scheme to redevelop Goodison Park.

The location of the planned stadium is Bramley-Moore Dock, in Peel’s Liverpool Waters site. The brick,  and glass design by New York architect Dan Meis is said to take inspiration from the old maritime warehouses nearby.

Peel L&P’s director of development for Liverpool Waters, Darran Lawless, said: “Everton’s new stadium is a once-in-a-lifetime opportunity for the whole city and a major catalyst for not only the Liverpool Waters development but the regeneration of the northern part of the city and Goodison Park.

“The design improvements that Everton have made as part of the revised planning application include exciting new public realm features such as a new stepped terrace, and opening up the historic waterfront which at present is inaccessible by members of the public.

“These plans complement our own efforts to make the entirety of Liverpool’s waterfront a place for thriving businesses and communities by creating thousands of new jobs, new homes and a destination for world class leisure and tourism.”

“The club has undertaken a huge amount of work to understand the many ecological, transport and heritage issues connected to this site and I applaud their approach to listen to all the relevant bodies to help inform their design.

“This resolution to approve is a big step forward for the club to realise a 25 year dream to relocate from Goodison Park, and this development would unquestionably be a dynamic catalyst for our wider ambition to regenerate this long neglected part of North Liverpool and create much needed jobs.

“Of course, we now await feedback from the Secretary of State on whether he wishes to call in the application for determination but the city council is committed to supporting a development that will economically benefit this city for decades to come and help fast-track our post-pandemic recovery and our City Plan.”

Everton has been advised by CBRE and has worked with the Liverpool Planning Authority, Historic England and other stakeholders for the past 12-months as part of the planning process.

Following the city council's approval, the plans are now automatically referred to the secretary of state at the Ministry of Housing, Communities & Local Government, which has 21 days to decide whether to call in the planning decision for review.