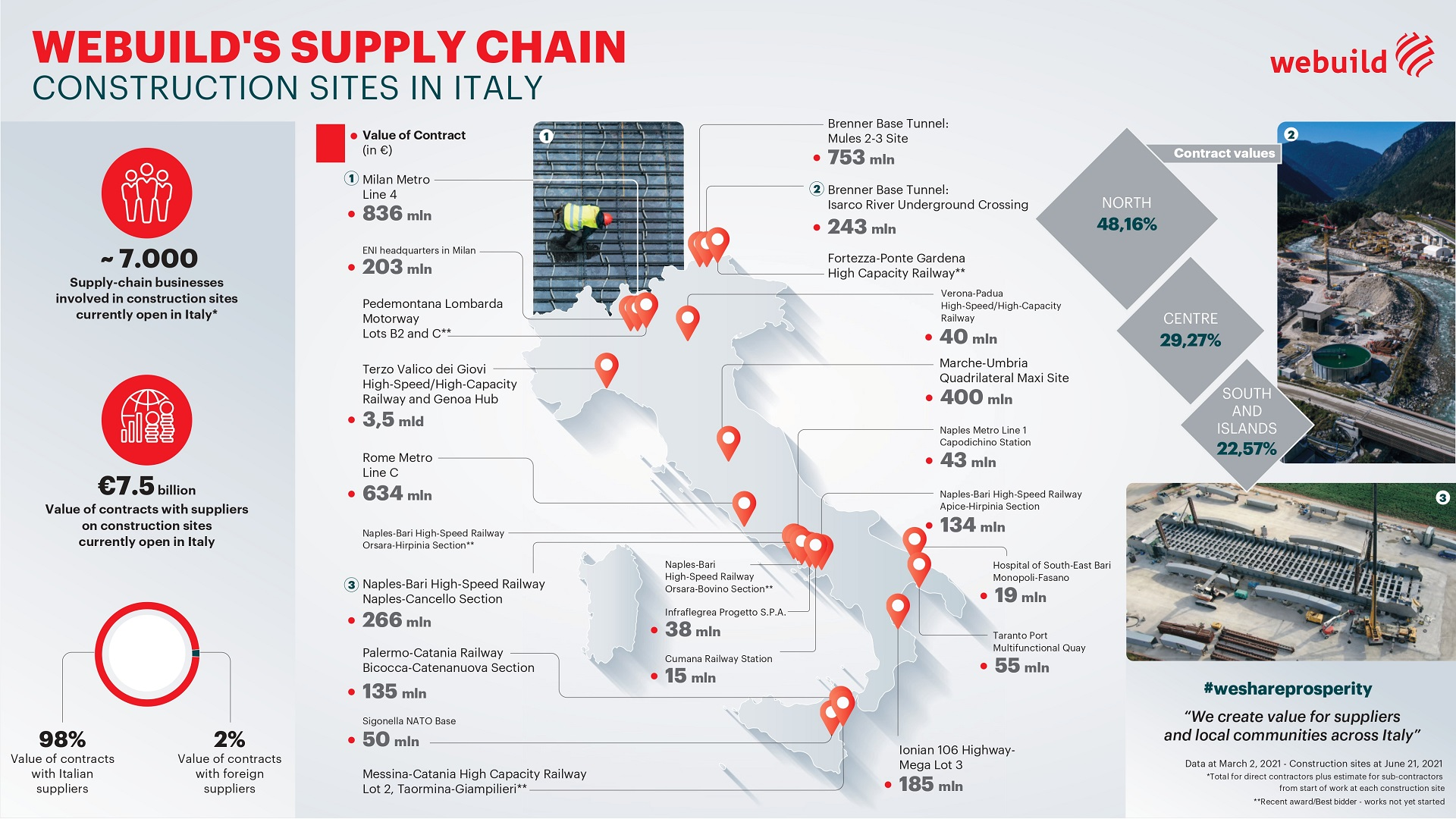 Webuild Group has been identified as the best bidder for a contract for the executive design and construction of the Orsara-Hirpinia section of the Napoli-Bari high-speed railway worth €1.032 billion. The works, which will be managed by Webuild for client Rete Ferroviaria Italiana (Gruppo FS Italiane) once they are awarded, will be done by a consortium in which the Group is leader, with a 70% stake, together with partner Pizzarotti (30%). The new result follows the recent awarding of another section of 11.8 kilometres of the same line between Orsara and Bovino for a value of €367.2 million.

The project, which will allow for the creation of 15,000 jobs, represents the latest contribution by the Group to the development of sustainable mobility in Italy, especially in the southern region, which the country is pursuing with greater determination, also with new investments in southern Italy by means of the resources of the Piano Nazionale di Ripresa and Resilienza (National Plan of Recovery and Resilience). The investments will have a significant impact on the modernisation of the country’s infrastructure and employment.

The contract for the Orsara-Hirpinia section is part of the upgrading of the railway between Naples and Bari to prepare it to become part of the fifth corridor of the Trans-European Transport Network (TEN-T) that would run between Helsinki and Valetta. The railway project has been identified as a priority under the government’s so-called Sblocca Italia (Unlock Italy) decree that is assigning investments to strategic infrastructure.

The new Orsara-Hirpinia section will be about 28 kilometres long and run mostly in a tunnel for about 27 kilometres. The speed at which the trains will be able to reach along the new line is 250 kilometres per hour apart from when they are at the open extremities where they will reach 200 kilometres per hour. The Bovino-Orsara section will open temporarily with the construction of a temporary link to the historic line next to the current Orsara station. Work on the Orsara-Hirpinia will begin, on the Bari side, next to the railway already built for the Bovino-Orsara section with the demolition of the temporary rail link to the historic line and the development of the Orsara station. After a brief raised section there is the Cervaro Viaduct about 314 metres after which, on the Naples side, begins the Hirpinia tunnel of 27 kilometres in length.

The Naples-Bari high-speed railway will be a strategic axis in the development of sustainable mobility in southern Italy. It will reduce by about half the time it takes to travel between Naples and Bari to just two hours. It will also bring northern and southern Italy closer together, bringing the travel time between Milan and Bari down to six hours. Its construction will support the economy and create jobs in the region. The two other sections of the railway on which the Group is already working – Naples-Cancello and Apice-Hirpinia – employ more than 2,200 people, directly and indirectly, and involve a supply chain of approximately 400 businesses, mostly Italian.

The Naples-Cancello section will have a new station in the town of Napoli-Afragola. Built by Astaldi of the Webuild Group, it will serve as an interchange with regional and high-speed trains. About 15.5 kilometres long, the section will pass through the towns of Casoria, Casalnuovo, Afragola, Caivano and Acerra. The Apice-Hirpinia section will run for 18 kilometres across the Apennine mountain range. This section will include a station at Hirpinia, three natural tunnels and four viaducts.

Elsewhere in southern Italy, Webuild is working on the third mega lot of the Ionian state highway in the Calabria region. In Sicily, it is helping double the Palermo-Catania high-capacity railway, as well as working on the Giampilieri-Fiumefreddo section (second functional lot of the Taormina-Giampilieri) awarded in March and on which work has started. With its construction sites in southern Italy, Webuild involves 1,700 businesses with combined contracts worth approximately €950 million. Thanks to Progetto Italia, the initiative the Group pursued to consolidate the construction sector in the country, the chain of 7,000 businesses that work alongside Webuild have seen their prospects grow and their level of competitiveness increase for iconic projects, such as the high-speed railway in Texas for which the Group recently signed a final contract worth $16 billion.