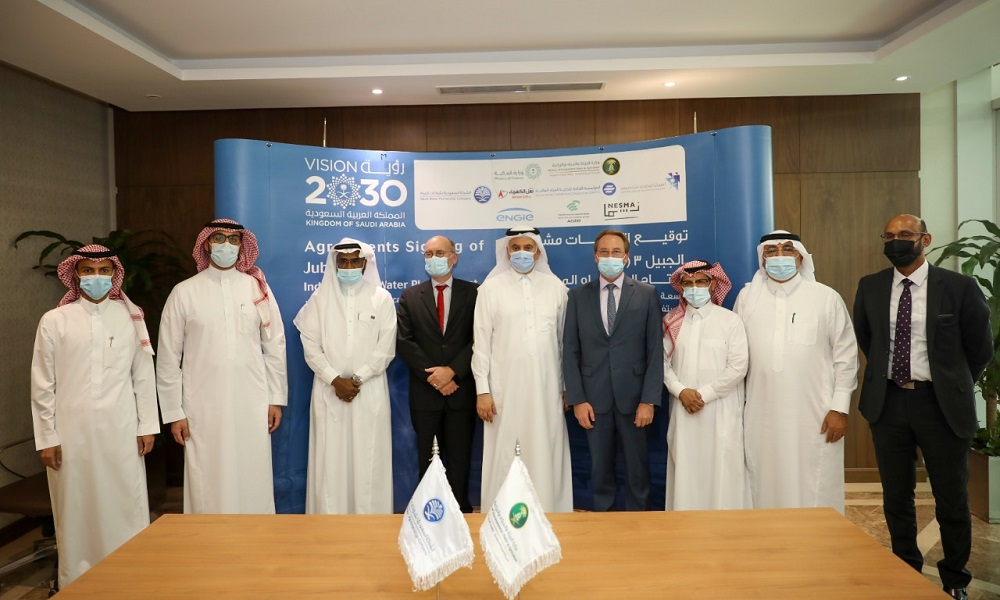 SWPC selected a consortium comprised of France-headquartered ENGIE (40%), Saudi based Nesma Company Limited (30%) and Abdulaziz Al Ajlan Sons for Commercial and Real Estate Investment Company (30%) in April and the new partners have now signed a 25-year Water Purchase Agreement in the presence of His Excellency Eng. Abdulrahman Al Fadli, chairman of the Board of SWPC and Minister of Environment, Water and Agriculture.

The consortium will develop and finance the desalination plant, which will be operated and maintained by ENGIE. The Jubail 3B project was awarded by SWPC as a build, own, operate (BOO) contract, with commercial operation expected in 2024.

The Jubail 3B IWP plant is located 65 km north of Dammam airport and will produce 570,000 m3/day of potable water through reverse osmosis technology to supply the cities of Jubail and Dammam once completed.

According to SWPC, the plant will include storage facilities for one operational day in addition to in-house renewable energy capacity to reduce grid electricity consumption throughout the desalination process.

The project is part of the water schemes in Saudi Arabia developed under the public-private-partnership (PPP) structure.

“Despite the fluctuations, liquidity crises and changing global market conditions, the Saudi Water Partnerships Company and the Consortium succeeded in completing the financial closure procedures in close cooperation with the group of lenders, which indicates the company’s efforts,” said Eng. Khalid Al-Quraishi, CEO, SWPC.

“The Saudi Water Partnership Company will provide full support for investment projects, and to enhance private sector participation in sustainable development by providing the opportunity for local and foreign investors to participate in the implementation of these projects, thus achieving sustainable development, providing job opportunities for young people, and supporting local product and balanced development, in order to achieve the strategic objectives contained in “Saudi Arabia’s vision 2030” and the initiatives approved by the Saudi Council of Ministers to encourage private sector participation in economic development initiatives.”

Turki Al Shehri, CEO, ENGIE in Saudi Arabia added: “The Jubail 3B project award represents another milestone achievement for ENGIE as a long-term positive energy partner to the Kingdom. We commend SWPC for continuing to encourage private sector participation to support the development of large-scale infrastructure projects.

“Through our projects, and in close coordination with our partners, ENGIE remains committed to providing value-added services and knowledge transfer to the local workforce.”