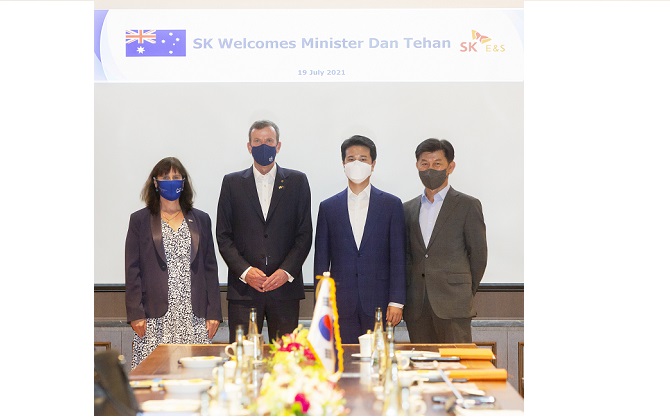 - CEO of SK E&S Choo Hyung-wook made commitment to “developing eco-friendly gas fields that capture carbon from emission and store it at closed gas fields by using CCS.”

SK E&S agreed to cooperate with the Australian government in development of natural gas fields with ESG at the forefront of mind.

On July 19, Choo Hyung-wook, CEO and President of SK E&S, and Dan Tehan, Australia’s Minister for Trade Tourism and investment, met in SK Seorin Building and agreed to cooperate in developing Barosa and Caldita gas fields in Australia- which SK E&S recently decided to invest in- into eco-friendly ones.

“Those gas fields in Australia will be operated in an eco-friendly way that captures all carbon dioxide emission from gas produced at underground reservoirs and stores it at nearby closed gas fields by using CCS*,” said CEO Choo in his opening remark.

SK E&S imports roughly 1.15 million tons of LNG a year from Australia, and announced last March it would invest another $1.4 billion in Barosa and Caldita gas fields in Australia it has developed since 2012 to turn them into greener gas fields by using CCS. The company also unveiled its plan to import 1.3 million tonnes of LNG annually for 20 years from 2025 in order to use it to produce clean hydrogen fuel.

“The LNG imported from these two Australian gas fields will be used to produce blue hydrogen known as clean hydrogen, which will be a milestone in the Korean hydrogen industry,” said Mr. Choo.

“As renewables in Korea can go only so far in the short term, it will be viable to import green hydrogen produced in Australia in the future if we can come up with a solution to hydrogen transportation,” added CEO Choo.

The company and the Australian authority also shared ideas on policy support for local CCS projects in Australia including carbon credits.