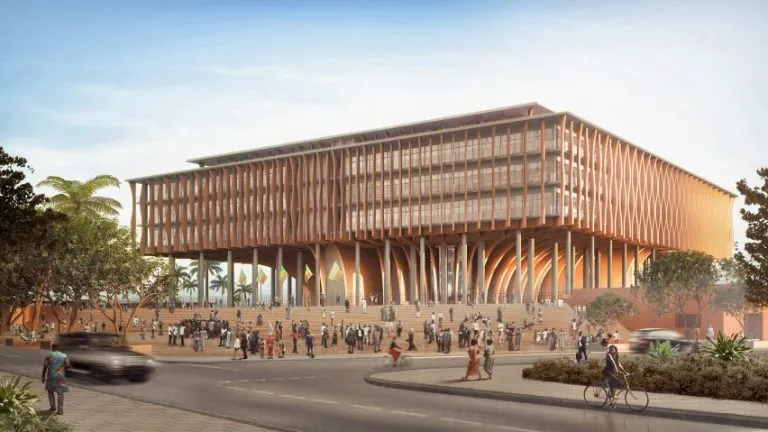 New Benin National Assembly Building is being developed on approximately 9 hectares piece of land in Porto-Novo, a port city and the capital of Benin in West Africa.

Launched in April 2021 the project entails the construction of a 4 storey main building with the shape of a palaver tree, under which ancient generations of West African communities hosted public gatherings and made communal decisions.

The centerpiece of the building will be its main assembly hall, featuring 150 seats expandable to 300 seats, six conference rooms with 80 seats each, two halls of honor, a large multipurpose room with 448 seats, and a staff restaurant. It will have a ceiling of exposed structural beams that evoke tree branches.

The trunk of the palaver tree will be represented by a large central courtyard at the center of the building, which will naturally filter ventilation and light into its interiors. The upper levels of the building will be used for private offices and auxiliary areas that will be set back from the building’s slated facade which is designed to filter sunlight.

The first floor will house the office of the President of the National Assembly and the offices of the chairmen of committees and parliamentary groups. The total number of the offices will be 83, in addition to 5 large meeting rooms with thirty seats each.

Finally, the fourth floor will have a panoramic restaurant with 120 seats, 2 large technical areas, and solar panel coverage.

These spaces will be connected to the assembly hall on the ground floor via a spiral staircase in the middle of the courtyard. The building will be topped with a roof terrace that will have uninterrupted views of the city center and a distant lagoon.

In addition to the main building, the project also involves the construction of a quaestor, which includes a set of 93 offices; 2 large meeting rooms; a staff restaurant with 120 seats; an infirmary, crèche, gymnasium, and bank counter service; a military barracks with a total of 14 offices, a dormitory, a meeting room, and an instruction room.

It also includes the construction of a car park with 250 spaces; and a large public garden that can be used by city residents as a central recreation space. The project will be completed with a public plaza to mark the public entrance to the parliament.