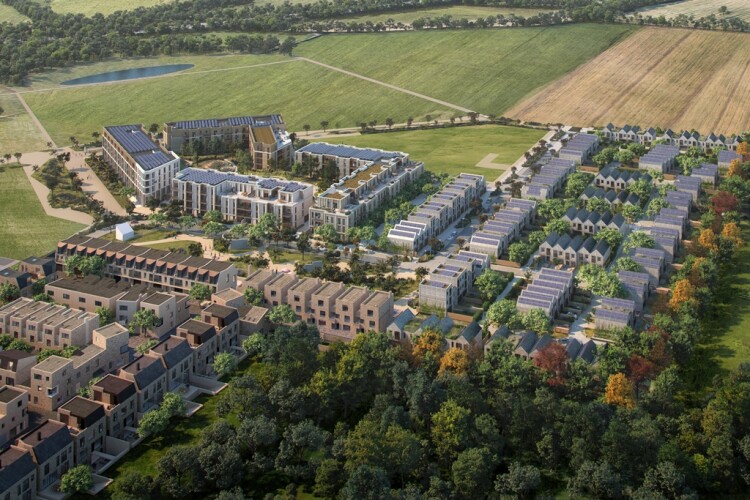 Apache Capital Partners has struck a £160m deal to supply prefab houses to the University of Cambridge’s Eddington development – now it just needs someone to make them.

Apache Capital’s new Present Made brand for volumetric build-to-rent housing has agreed to deliver 370 units for Eddington but has no manufacturing capability and has yet to conclude a subcontracting deal with a supplier.

Eddington is new community being developed on a 150-hectare plot two miles northwest of Cambridge city centre. Plans include 3,000 homes, 2,000 student bedspaces for the university and 100,000 sqm of new academic and commercial research space.

Eddington is the first site in Present Made's initial £1.6bn development pipeline, revealed in May, for 3,000 prefabricated homes for private rent across the south of England. It has a further three sites in the Oxford-Cambridge Arc in addition to Eddington, with further announcements expected later this year.

In each case, Present Made plans to retain ownership of the housing to create a revenue stream for Apache Capital.

Apache Capital Partners, incorporated in 2012, is a UK real estate investment company. It is involved in numerous developments and has big plans although its latest accounts show net assets of just £800,000 on its balance sheet.

Present Made’s concept has been ‘curated’ by Jo Cowen Architects to offer “a new type of high quality rental housing that has never been seen before in the UK”, according to the publicity material. In an interview last year Jo Cowen described volumetric offsite housing as ‘the future’. She said: “It's the only way that ultimately developers can compete with house builders by developing their own product, because you aren't fully reliant on the traditional contractor”.

Richard Jackson, co-founder of Apache Capital and chief executive of Present Made, said: “Harnessing the power of institutional capital, Present Made will own, develop and operate beautiful, sustainable homes for the long term. Our aim is to create a new way of living, providing aspirational yet attainable housing set within living streets and active communities that are integrated with their surroundings. Our vision is to encourage healthy and sustainable lifestyles, making them second nature to our residents.”

Present Made said that it expects to be able to name its building supplier before the end of the year.